I've lived in the valley since 1971 and my dad got moved here because of the tech industry (he got a PHd at Rutgers in New Jersey and since his family lived in NY and NJ I'm sure he would rather have gotten a job on the east coast, but Ampex hired him and moved him here. A few years later he moved to Lockheed, which shows that military spending is a major reason for geeks to move and stay here, at least in the cold war days where the government was spending billions to stay ahead of the Russians. Apple co-founder Steve Wozniak's dad worked at Lockheed too, so you could say that that enabled Apple to form here).

Some things that no one has touched on yet. 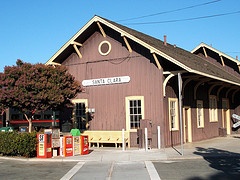 First, this is a railroad town. It wouldn't have existed without it. Literally. First of all, if you go and visit the Santa Clara train depot inside is a museum. One of the photos on the wall is of this depot with NOTHING around it. Today it is the hub of Silicon Valley. Inside the rail yard, too, is one of the first computers used in Silicon Valley. It's an interlocking machine. Basically controlled the the flow of trains in and out of the rail yard. These were the first "geek machines" along with communications, and other systems. That drew the first "geeky types" out west, to build systems for the railroads. Many liked the area and stayed.

The railway also brought a few other things:

1. They now are where a lot of the Internet cables are. I saw them putting in fiber lines to Santa Clara University right under the tracks here. Without those, Yahoo, Google, and Facebook couldn't exist here. The Internet cables to Stanford exist largely along existing rail lines. Today the rail line continues to bring workers into Palo Alto, too. I recently was involved in looking for real estate and offices near train stations cost more than elsewhere so you can see the effect of the rails, even today.

That brings us to Stanford University and how it was formed. Here's a photo: 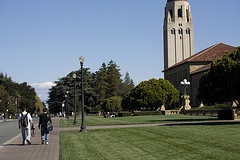 2. The cross-continental rail system made Leland Stanford very rich (he was a VP on the Central Pacific). Guess what that caused? Yes, Stanford University. It's why the Golden Spike resides in a museum at Stanford, not at where the railroad was completed in Utah. The story of what got Leland and his wife to start the university is interesting, too. You should visit the Memorial Chapel if you ever visit the campus and see the tragic story of how his son died and that got them to really pour their energies into making Stanford a world-leading University.

Stanford is why Silicon Valley is here. Stanford gave birth to HP and also delivered many engineers to the military projects that were developed here, like Nasa's wind tunnels, and these new semiconductor companies like Fairchild. Those projects and early companies spun out and formed the companies we recognize today.

As Silicon Valley, in the 70s, started getting real momentum, it pulled in people like my dad, who were geeky engineers. That, in turn, pulled in more engineers (they do like to hang out together -- even today I hear from geeks all over the world who would love to move to Silicon Valley because it's hard to find other folks to build stuff with in their local towns).

That caused an ecosystem to be built, with lawyers, banks, shops (Fry's Electronics), PR/press, marketers, and investors -- all who understood the geeky entrepreneur. I haven't seen an ecosystem like it anywhere else (although China is getting close and Israel has many pieces, too).

Today you can see that ecosystem rubbing off on nearly everything. Even my yogurt shop is playing with tech and trying to find a way to serve its customers better and that drags in even more companies, who love visiting here.

MindFlash's CEO, told me https://www.youtube.com/watch?v=H... that she moved the company here because of:

1. Access to talent. Her company started in Southern California and there just wasn't the pool of programmers that could help her scale her company down there, she told me.

2. Access to ecosystem. In the Valley there are tons of lawyers, PR, marketers, and others that understand tech companies and are able to help them faster.

3. Access to capital. There's a far greater pool of angel and VC folks available up in Silicon Valley so entrepreneurs have better choice and get better terms, not to mention that the money makes quicker decisions than other places in the world.

4. Access to PR. The world's tech press lives in San Francisco, or, at least, has offices here. So, getting PR means just taking a drive vs. getting on a plane. Plus, a lot of PR is sort of accidental. Being at the right party and getting introduced to the right person means getting a story. That's hard to make happy from outside the area.

5. Plus her team liked the weather here, and the access to various things to do on weekends. Carmel, Napa, the beach, Sierra Nevada mountains, are all within a drive. Not to mention that restaurants in SF are top notch and are well documented with Foodspotting and Yelp, amongst others. Her team also likes being around other tech companies, so there's a cross-company learning process and she didn't admit it, but it's nice knowing that you can get another job if your startup fails, while other places in the world have far fewer employment opportunities for geeks.

A good read on this topic is Loic Le Meur, who moved from France to San Francisco: http://www.telegraph.co.uk/techn...

Lots of other CEOs, have given me the same reasons that Loic listed.

One thing Europeans tell me is they like the "freedom to fail" culture here. It lets them try to swing for the fences, while in Europe they tell me they would be very likely to go for a base hit (IE, build a company for the local market because that's far less likely to fail). Failure, in Europe, they tell me, is culturally bad and can have deep financial consequences for your family. Those two problems don't exist here.

But for me, it all started with that railroad line and one guy who got rich because of it.